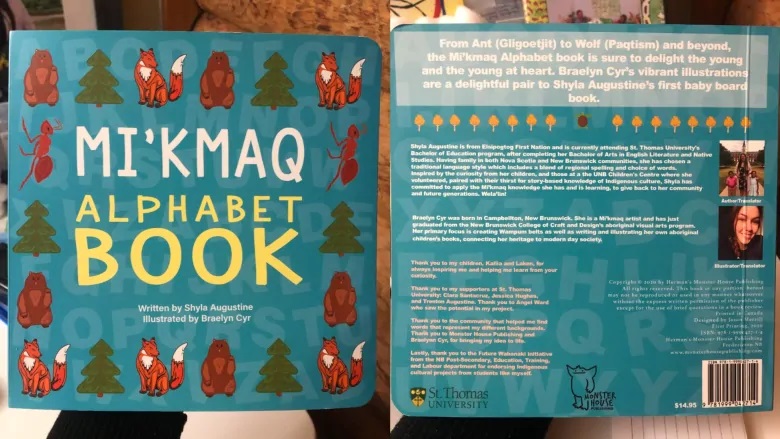 Shyla Augustine is hoping to help give her children and others a chance to learn a bit of the language of her ancestors.

Along with illustrator Braelyn Cyr, Augustine has created an alphabet book that includes the Mi’kmaw word for the animals used to highlight each of the letters from A to Z.

In an interview with CBC’s Shift-NB, she said she got the idea for the book while volunteering at the University of New Brunswick’s Early Childhood Centre.

“The kids were really curious about the Mi’kmaq language and how to count in Mi’kmaw, and words, and because my son was actually attending the childhood centre at the time, he just so happened to be there.”

After realizing that she didn’t know many words in the language herself, she decided to create an alphabet book she could share with the children at the centre.

Growing up, Augustine said she spoke some Mi’kmaw while going to school on-reserve, and she picked up some listening to members of her household speak it.

She later transferred to a school off-reserve, where the language wasn’t spoken or taught. She said her shyness as a girl also kept her from practising it much.

As an adult, she’s hoping to reconnect with her language and give that same opportunity to her children.

“I really want my children to know their own language and who they are and where they come from, because that’s an important thing to know about yourself. And I want them to be proud of who they are.”

Augustine said her family members even offered some inspiration for the animals to include in the book.

Deer, her son, Laken’s spirit animal, is the one used to represent the letter D. That animal is called “Lentuk” in Mi’kmaw, she said.

And otter, which is used to represent the letter O, was inspired by her brother, who lives with cystic fibrosis.

“My children are very close with him and they love him too, so we decided that we were going to put a representation in my book of him as well.

“It was really made with love.”

Augustine said the book is being published by Monster House Publishing and copies will go on sale next month.