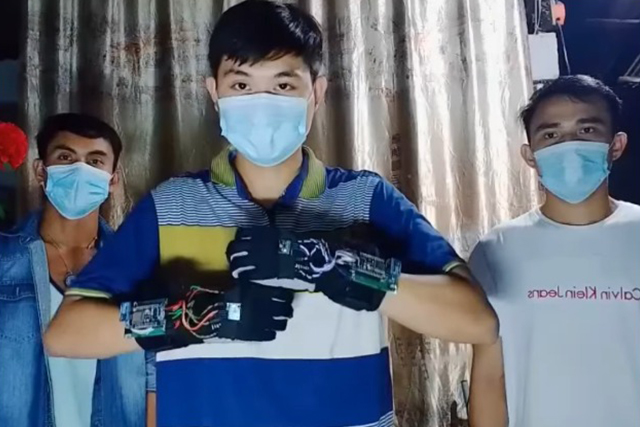 Introducing our Thesis entitled “Filipino Sign Language to Voice Converter”. A trainable gloves that can interpret Filipino sign language and convert it into speech.

“Introducing our thesis entitled ‘Filipino Sign Language to Voice Converter.’ A trainable glove that can interpret Filipino sign language and convert it into speech,” one of the students, Francis Anthony de Guzman, said in his Facebook post.

The three fifth year college students—De Guzman, Rency Dela Cruz, and Klenn Arvin Alcibor, made a pair of customized gloves with thin, stretchable sensors that span the length of each of the five fingers.

The data will be sent via WiFi to the computer for data processing.

On June 30, the students visited the Office of the College President and met with Charlito Cadag, president of CSPC and vice President for Academic Affairs of the Central Bicol State University of Agriculture.

“I aspire to be this smart!” the student wrote.
“Got the chance to meet the young and humble minds behind the viral thesis, ‘Filipino Sign Language to Voice Converter.’ Congratulations, Francis Anthony, Rency, and Klenn Arvin — true blue CSPCeans! Nakakaproud kayo. Road to Gawad Likha and patenting na this!” he added.

The  CSPC said the group previously planned on pursuing a study that aims to “give voice to speech-impaired people using a mechanism that combines Artificial Intelligence and microcontrollers.”

The team was also inspired to push through with the innovation of the sign language converted after the sudden death of one of their members, Rei Mark Tandaan, who passed away last year.